“A Blind Artist Changes His Perception”

Jim Stevens working in his studio. (Courtesy of Jim Stevens)

True artistic talent is hard to come by, and making it as a professional is even more rare. One man has had his art featured in galleries across the country and has had his work collected internationally. Surprisingly, he’s a legally blind artist.

Jim Stevens is a 68-year-old Vietnam War veteran residing just outside Denver, Colorado. In 1970, when he was 19 years old, he was on a patrol mission and around midnight his unit became engaged in a firefight. During the battle Stevens was shot in the jaw, which left bullet fragments in his brain. Doctors were able to remove two of the fragments, but two still remain in his brain.

Stevens returned from Vietnam in late December 1970, and left the United States Army in 1979. His first job after the military was working as a commercial diver, and after a period of time he went back to school and earned degrees in English and publishing. Two days after his graduation, he started teaching English and law at the University of Colorado, in 1988.

Stevens was working on a lesson plan in 1993, and noticed half the words on his computer screen were beginning to disappear. The next thing he knew, he woke up in the hospital. One of the bullet fragments in his brain had moved, which caused a stroke, leaving him legally blind.

“At first I was just stunned. I really didn’t know what to do,” Stevens told The Epoch Times. 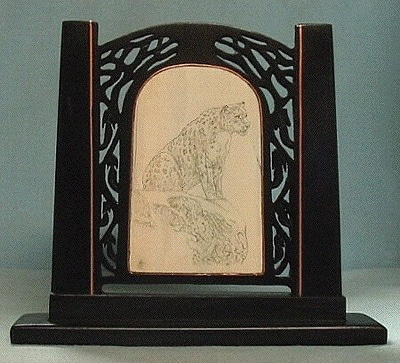 Unfortunately, he and his wife divorced afterwards. Stevens was now a blind, single parent. His oldest daughter started having behavioral issues, and Stevens found himself in the principal’s office frequently. That’s when he decided to enroll her in a martial arts class to instill a sense of discipline. Soon, his youngest daughter started taking the class as well, because she had seen that it had been good for her older sister.

That’s when Stevens thought it might be positive for him as well. He walked over to the studio, and asked the sensei if he could teach a blind man. For the first three months, Stevens sat on the floor of dojo to improve his sense of hearing. The sensei would move throughout the studio, stop, and have Stevens point to where he was. After the sensei was confident that Stevens could hear something coming at him, he began throwing punches and kicks at him. Seven months later, Stevens began refining his skills.

After three years of training, the sensei enrolled him in the “Tournament of Champions” martial arts competition. He had Stevens leave his cane in the locker room because he didn’t want anyone to know he was blind. After five fights, the 51-year-old left the tournament with a broken nose, three cracked ribs, a dislocated left knee, a torn left rotator cuff, and the championship trophy.

“I felt proud. I felt amazed. I felt stunned. I think that was a wake up call,” Stevens said. 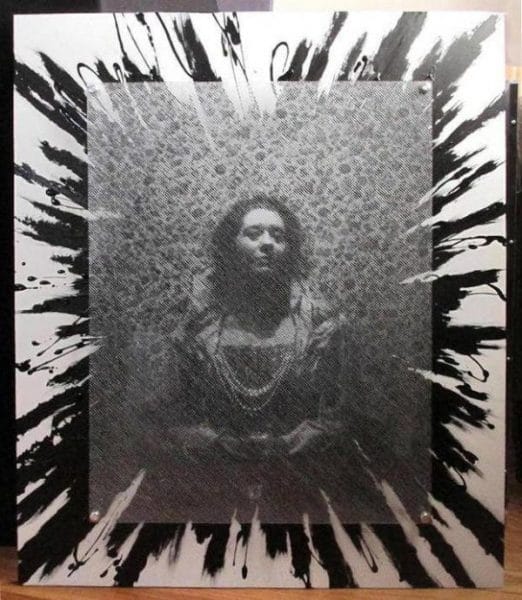 An abstract linear painting entitled “Lady with a Chalice” by Jim Stevens. (Courtesy of Jim Stevens)

Stevens had always loved art as a hobby, and had learned how to draw and paint from his grandmother. After he won the tournament his daughters urged him to pick up his craft again. He was hesitant, but after his sensei had learned about Stevens’s interest in art from Stevens’s daughters, he told him that “art teaches art.”

Stevens went home, and started repairing the studio that he had destroyed years before following his stroke. For the next two years, Stevens kept refining his craft by carving a single sculpture despite being legally blind and only being able to see pinpoints.

He was frustrated one day, and threw the sculpture he was working on across the room. His daughter walked over, picked it up, and told him that he promised her and her sister that he would never quit. Two years later, he finally finished the six-inch tall sculpture of a wizard he had been working on. 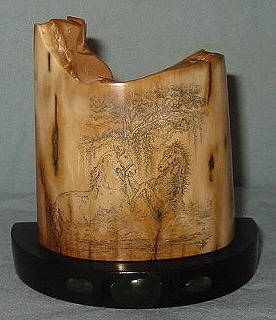 “When I finished that carving, it just dawned on me that, you know what, I might be able to do this,” Stevens recalled.

With the help of some specialized lenses, he continued to work. However, since he was only able to focus on the pinpoint he was working on, he had to develop a new way of seeing. He would scan his eyes across the canvas to see what it looked like, and return to the point he was working on.

At first, he gave his artwork to family and friends. Seven years later in 2001, someone commissioned him to do a scrimshaw piece, which is a genre of art in which engravings or carvings are made on bone or legal ivory. After mastering scrimshaw, he moved on to painting and sculpture work again. Before he knew it, his work was being featured in galleries, and his hobby had become a profession.

Every year, the Veterans Affairs Administration holds the National Veterans Creative Arts Competition. Stevens has won the gold medal in seven separate competitions, winning in his first in 2007.

Furthermore, Stevens has developed two new painting techniques and published three books. In his studio, there are notes on each of the walls to remind him to keep going, which read: “A man with vision is never truly blind.”