The grand prize winners are Jim Stevens from Wheat Ridge, CO, a legally blind Vietnam veteran, who overcame his disability to become an internationally acclaimed artist; and Louis Stack of Calgary, AB, a health and wellness innovator. Each of these winners will receive lifetime Alignable Premium memberships valued at $10,800.

Eight other talented small business owners have been chosen as national runners-up in the contest, as well. They’ll each be awarded six months’ worth of Alignable Premium memberships.

In addition, 66 state and 12 provincial storytelling champions have been announced, who will soon receive badges on their Alignable profiles reflecting this regional honor. For a full list of those winners and their submissions, go here.

The Top 10 Storytellers’ stories across the U.S. and Canada range from hilarious to heartbreaking, representing the turmoil and triumphs involved in small business ownership. But one theme remains consistent: small business owners are determined to get past obstacles of any size.

“Ingenuity, creativity, positivity, and sheer grit were demonstrated by the authors of many of these captivating stories, reminding all of us that small business owners are never down for long, even in the toughest times,” said Alignable’s Co-Founder and CEO Eric Groves.

Choosing the winning stories has not been easy, as so many of the submissions amplified the can-do attitudes and struggles that accurately reflect the dream (and downsides) of small business life.

However, the following stories from national winners and runners-up all have something that makes them unforgettable.

Our judges continue to marvel at the perseverance both grand prize winners exhibited in these stories.

Jim Stevens, who owns The Art of Jim Stevens, gives us a tell-all account of his life and career so far. He writes that a head injury in Vietnam later led to severely impaired vision. (As he says, only a pin-dot of vision remains in both eyes). But that hasn’t held him back — he overcame his disability years ago to become an internationally recognized artist. And that’s just part of Jim’s very compelling story.

Jim Stevens of The Art Of Jim Stevens in Wheat Ridge, CO is one of our two Grand Prize winners in Alignable’s WOW-Worthy SmallBiz Story Search. Here is Jim’s winning entry. 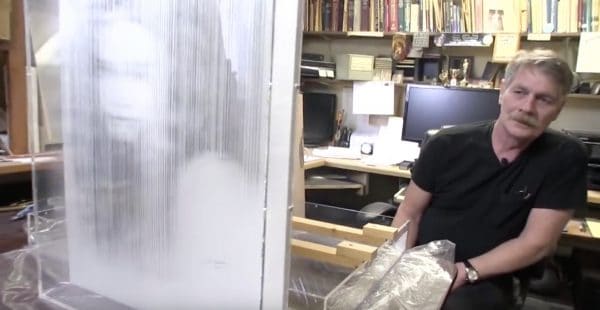 Wheat Ridge gave me the light to change my life.

In 1970, while a Staff Sergeant in the Army, I was shot in the head during a combat mission in Vietnam. It left me with bullet fragments in my head and severe migraines. Twenty-three years later, in 1993, a bullet fragment moved causing a stroke in my visual cortex, leaving me suddenly and legally blind, with only a pin-dot of vision remaining in both eyes.

I lost my job teaching at the University of Colorado, my wife left, and I was suddenly the blind single parent of two pre-teen daughters. I also stopped doing the artwork I had loved so much. My bouts with depression and anger were crushing at times, so much so that I destroyed most of my unfinished art, notes, drafts, and records.

But in 2000, at the urging of my daughters, I determined to reinvent myself and become a full-time artist despite my disability. I began by searching for a new home and finding the perfect one in Wheat Ridge, Colorado. It sits on a hilltop surrounded by beautiful and unique sunlight and a large garage I could remodel into a new studio. Then I set to work. My first goal was finding a variety of special lenses to help with my technical skills … and then began a long, frustrating two-year struggle to relearn my craft without the eyesight an artist so desperately needs.

At the same time, again at the urging of my daughters, I also began the unlikely study of the martial arts.

Despite the setbacks and frustrations, I refused to quit either of my new life goals.

Today, my award-winning art is galleried across the country and my paintings, scrimshaw, and other works of art are collected internationally. I have invented two entirely new monochromatic painting techniques and have written three books on art, published by Schiffer Publishing. In 2010, I was honored as a registered Kennedy Center Artist in the artist affiliate program of the Kennedy Center for the Performing Arts and I am also the recipient of the U.S. Veterans Administration National Gold Medal for Fine Art.

At age 51, I also became the only legally blind man (and oldest man) to ever win the men’s fighting competition at the martial arts “Tournament of Champions” – an event with martial artists of all ages from several states. And my sensei made sure no one knew I was blind until after the competition was over. I left the tournament with a broken nose, three cracked ribs, a torn rotator cuff, a dislocated knee – and the first place trophy as Tournament Fighting Champion.

Whenever I felt overwhelmed by the challenges in front of me, my youngest daughter would softly remind me, “Daddy, you promised not to quit.” That little reminder was always enough to make me stiffen my backbone and keep moving forward with my life.

Eventually, my art made me so busy, I actually forgot to be angry. One day I simply realized I wasn’t depressed anymore.

I lost my eyesight in just 30 minutes and my self-worth soon followed. I finally had to accept being blind, but once I did, I also accepted the fact that to have a life, I would have to reinvent my life.

Today, I have a new career as an award-winning, internationally collected artist and author. Who knew?

Three-time Emmy award-winning screenwriter Paul Cooper found out about me and has created a working screenplay about my life. In his words, “It’s a story that needs to be told.”

P.S.: Despite my accomplishments, I am still occasionally reminded that I have a visual disability. I tried to fix a small problem on the roof of my home but fell off, causing a tear in my abdominal wall. At the hospital, the surgeon looked at me and said, “Jim, you’re blind. We don’t want you on the roof.”