Jim Stevens places some of his etchings on ivory as a part of his scrimshaw work. Pankaj Khadka/The Chronicle-News

Students enrolled at Trinidad State Junior College this summer are getting a chance to learn about the art of scrimshaw from a world-renowned author and artist.

“After the gun is made, all the carvings, all the inlays, beautiful wirework and things like that are done, and scrimshaw is part of that embellishment process,” said Stevens. The week-long course included learning about the laws affecting the use of ivory. Some types of ivory can be used but laws in many countries outlaw the use of some ivory.

Stevens said most of the ivory used for scrimshaw carvings comes from the extinct woolly mammoth, which can be bought and sold legally around the world.

Students learn how to work the ivory, and make it shine by polishing it.

Scrimshawing is taught as part of the junior college’s gunsmithing program, and is an ancient art. 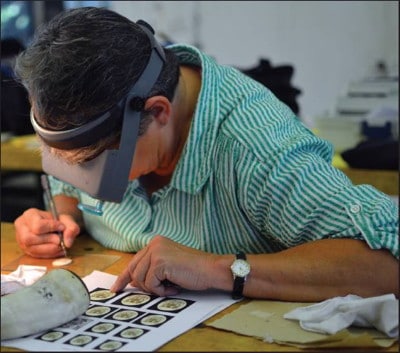 While scrimshawing makes guns and other weapons beautiful, Stevens said it also had a very practical effect because ivory engraved guns, swords and knives could be easily gripped by their users even when the weapons were wet.

“If it gets wet in battle, the ivory grip will keep your sword firmly in you grasp, so it had a practical reason. So if they could afford it, they would put ivory grip on their weapons,” he said, adding that it is a common practice today with most collectors preferring ivory grips.

Stevens has been doing scrimshawing for more than 40 years and had three books published on how to do it with ivory and other man-made materials.

Normally, his students are newcomers to scrimshawing, and Stevens said they all have the same concerns on the first day about not knowing how to do it.

He said they are always surprised by the end of the course at how beautiful the artwork is.

During Vietnam, he was shot in the head and bullet fragments were left in his head.

“From me to you, I can see that one eye,” said Stevens. “I assume you have an eyebrow, but I have to look up to see it, and then I have to look around your face to see what you look like. I have a pin dot vision in both eyes just straight ahead. I have no peripheral vision at all,” said Stevens.

He said it took him more than two years of constant practice to find a way to do his work again but he finally was able to resume his artwork and write books about scrimshawing.

Stevens has learned to switch between visual lenses to help him with his artwork.

He now has five different lenses that he uses to work on detailed parts of his artwork or to be able to work on larger parts of the job.

“I constantly switch between these lenses to accomplish the work, but I’ve finally been able to regain the skills,” he said.

Also, he said being legally blind has made him focus more because he must be more careful when carving ivory than he use to be.

“When I was trying to regain my skills, I would actually have my daughters look over my shoulders to direct where I was going,” said Stevens.