ASPEN | An evocative and diverse collection of artwork by American military veterans is currently on display at Aspen’s Gallery 8K on the Hyman Avenue mall. 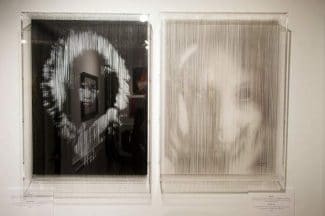 There are essays to read, recorded music to listen to and a gallery full of visual art including sculpture, painting and photography. This “National Exhibit of Veteran Art” survey, presented by the Basalt-based nonprofit Challenge America, collects works from veterans across the U.S. and here in the Roaring Fork Valley from all branches of the military.

Dani Figueroa’s “Part of My Story” is one of the first things you see when you walk in the door of the slender gallery. At first glance, it appears to be a simple still-life of two pairs of shoes. Take a closer look, however, and you notice that one is a pair of military boots, the other a pair of Doc Martens.

“I wanted to depict the polarity between regimented and laissez faire,” Figueroa wrote in an artist statement (most of the works in this show include some words from the veteran artists). “The painting is also meant to capture visually the truth of me then and now.”

Figueroa first deployed in 2004 and stopped making art after life at war, but returned to a painting practice — like many in this show — through taking part in an art therapy program a decade later.

Painter and veteran Phyllis Miller has created three large-scale pieces for the show. Her “The Price of Freedom” is a gut punch of a painting. It shows people frolicking in Central Park, but below the placid scene is an underground hellscape of war, fire and bloodied soldiers.

Miller calls it “a tribute to those of valor and to those who are among us with the nightmares of wars past and present, for the price of freedom.”

Jim Stevens, legally blind from combat injuries, distorts the viewer’s vision in his imaginative and meticulous works, including an acrylic painting made out of 1,000 strands of layered monofilament.

The center of the gallery is filled with sculptures of soldiers’ faces by Peter Buotte, who is in his 27th year of active duty in the U.S. Army and currently stationed at Fort Hood, where he found models for the pieces in the Aspen show. 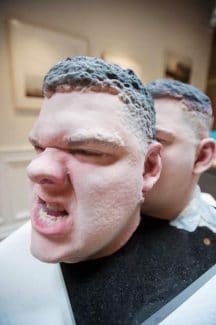 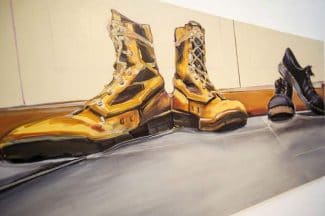 Longtime local Dan Glidden shares evocative photographs from his time in the Mekong Delta during the Vietnam War. His photo “The Victors?” depicts a close-up of Vietnamese children he met in 1969.

“I look at these faces,” he says in his artist statement, “and wonder what happened to these children. Where are they now?”

Glidden’s work also includes an image of a church destroyed in the war and a dreamy shot of a military helicopter at sunset (titled “Riding Off Into the Sunset”).

Challenge America, the nonprofit that organized this show, is aimed at connecting communities with veterans and building support for military families. The works here go a long way toward showing those of us who have not served the diversity of experiences and perspectives of our men and women in uniform. They’re required viewing.