“An artist loses his sight to find vision.” 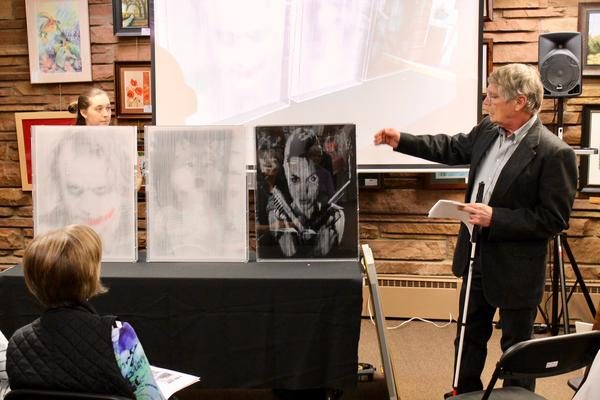 Artist Jim Stevens (right) presents his monofilament paintings during a salon at
Main Street Creatives gallery in Brighton. His daughter, Megghan (left) pushed her
dad to return to art after he lost his vision. Photo by Andrea Tritschler

Artist Jim Stevens sees the world through a pin-sized hole, but his monofilament and abstract linear paintings show a different kind of vision.

He talked about his artistic process and his journey during a presentation at Main Street Creatives Gallery, 36 South Main Street, on Thursday, March 16.

Stevens creates monofilament portraits with fishing line strung up inside clear boxes held in place by sterling silver. Each painting has eight layers hand-painted by Stevens. He paints each layer exactly the same and arranges them so everything lines up.

Stevens said his path to becoming an artist was a complicated one. He was always interested in art, learning how to paint and draw “on the sly” from his grandmother, who he said was an amazing watercolorist. His parents were never thrilled about the idea of him wanting to be an artist, so Stevens joined the U.S. Army and worked a variety of different jobs in his career, but “couldn’t get away from art.”

“It’s kind of funny how things can change,” Stevens said before explaining more about what happened to his eyesight.

A veteran who fought in Vietnam, Stevens was shot in the head during combat. Years later, in 1993, a migraine collaborated with supposedly benign bullet fragments remaining in his head and caused a stroke in his visual cortex. It took his eyesight in 30 minutes.

While Stevens does have some vision, he is now legally blind.

“No question, I was angry,” Stevens said. “I took my crowbar to my motorcycle, destroyed my art.”

It took encouragement from his two young daughters, who were 11 and 13 at the time, for Stevens to pick himself up and re-learn how to do art, this time “without the vision artists need.”

“They bugged me until I promised I’d try,” Stevens said. “I’m fortunate I had two girls that pushed me.”

Stevens aquired some lenses that he found could help him with his extremely limited vision. Some he bought, others he made. The lenses helped him see better while he was creating, and through trial and error, he taught himself how to draw and paint again.

Eventually, Stevens got better at his artwork and started getting noticed.

Stevens has sold his art to collectors all over the world and has published three books about art. He has won multiple best of show awards.

Stevens’ art is unique, requiring precision, technique, and lots of patience. It takes almost two months to complete a monofilament portrait. He is one of two people worldwide doing this type of art.

“If I make a mistake, it’s miserable,” he said.

Stevens’ said his inspiration for painting on fishing line came from his 6-year-old grandson. Megghan Stevens, his youngest daughter, was taking her son fishing, but he had never gone before. To give him a little bit of practice, she bought a toy fishing rod, which he cast over and over again until it was completely tangled.

Megghan said her son brought the fishing line to his grandpa, Stevens, to untangle. He saw the clouds passing by as shadows on the line, and a vision struck. Capturing a shadow became his focus.

“Some street art I really do like,” he said. “ I thought how can I bring street art back into the studio?”

He started looking at some abstracts and “it hit.”

Stevens paints the negative space, so the black background is seen through the plexiglass. He demonstrated this by holding a white piece of paper behind the plexiglass and the image seemed to disappear.

More than 20 people who came for Stevens’ presentation all began chatting excitedly among themselves.

“My vision had been blurry long before I lost my eyes,” Stevens said. “It took a war, a stroke, and two little girls to see as clearly as I did when I was a kid.”

He began practicing martial arts, again at the suggestion of his daughters. It became a tool to help him overcome his anger and depression.

Stevens’ work is on display at the Veterans of Foreign Wars Post 1 at 841 Santa Fe Drive in Denver as well as other galleries and showcases around the world. He also is accomplished in bronze sculpture, jewelry and etchings on materials such as bone and ivory.

Artists and art enthusiasts of Brighton at the event said they were inspired by Stevens’ story and his work.