A stroke robbed artist Jim Stevens of his sight, but not his craft or his will to succeed.

JIM STEVENS IS AN internationally recognized scrimshaw artist, a black belt in karate, and the author of three books. 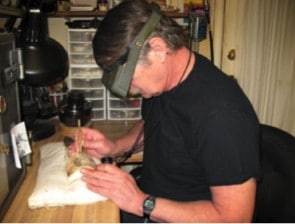 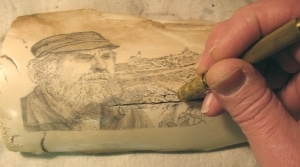 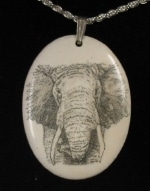 Despite loss of his eyesight, Stevens mastered the complex American art form of scrimshaw, producing masterpieces for clients around the world and authoring three books on the intricate craft.

He lost his vision in the ’90s, yet his major achievements in the fine and martial arts have come after losing all but a “pin dot” of his eyesight to a stroke. To truly grasp haw such a comeback is possible, it helps to understand that Stevens is a Vietnam veteran who rejoined his U.S. Army Long Range Reconnaissance Patrol unit a mere two weeks after being shot in the head during combat in 1970. Trained by U.S. Special Forces, “I learned from men who don’t know how to quit,” says Stevens, now 60.

After leaving the military, his first stop stateside was Denver, where he opened a scuba diving shop and became a commercial diver, specializing in underwater power plant maintenance and repair. There were some ominous echoes from his war wounds even then. He occasionally suffered debilitating migraines, possibly caused by bullet fragments that Army surgeons were unable to remove. At times, the pain was so intense “my knees would buckle,” Stevens says.

But he wasn’t going to let crushing headaches stop him from making a successful re-entry into civilian life. His next job was at a refinery, as a precious metals separations chemist–a skill he taught himself at the public library over a single weekend. At the refinery, Stevens discovered and fell in love with ancient mammoth ivory that miners unearthed as they sifted deep in the earth for gold. They had no use for the broken bits of tusk, but Stevens did. He looked at the ivory and imagined a dolphin cresting a wave. And that’s just what he sat down and carved. His boss at the refinery was so impressed by the sculpture that he showed it to the owner of a gallery, who requested more.

Stevens first developed an appreciation for art as a young boy, when his grandmother taught him to draw using charcoal on paper. Ivory presented Stevens with a wholly new kind of canvas, and he enjoyed transforming it into whimsical designs, such as a snake preparing to lunge. He later went beyond carving and taught himself scrimshaw, in which the artist uses sharp tools to craft thousands of fine scratches or small holes into intricate designs, using ivory, bone, sea shells, antlers, whale teeth, and other natural materials. Since his early involvement with scrimshaw, Stevens has become an expert in the field and has written authoritative books on the subject.

But art wasn’t going to pay the bills for Stevens and his family. A high school dropout with a GED, Stevens next enrolled at the Metropolitan State College of Denver and graduated magna cum laude with dual degrees in English literature and publishing. He was hired the following week by the University of Colorado to teach communications and employment law to military veterans. With a university job, a growing reputation in the art world, plus a wife and five children, life was good for Stevens, except for those migraines. Then in a single day, his world collapsed. In 1993, he suffered a migraine so severe it may have led to a stroke. Waking up in the hospital, the surgeon gave Stevens sobering news His vision was all but gone. “I told the doctor, ‘Sorry, but I gave at the office 20 years ago,'” the vet recalls. “The doctor said, ‘Sarge, you just gave again.'” 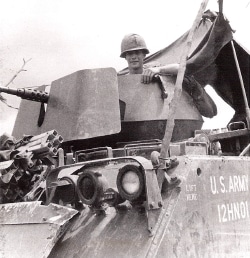 The Vietnam vet spent years studying martial arts before entering a tournament and becoming the oldest and only blind man to win the Martial Arts Tournament of Champions.

Angry and bitter, Stevens went home and destroyed his art studio–precious paintings, drawings, sculpture, scrimshaw–with a baseball bat. He thought his life as an artist was over. How could he paint, draw, or do scrimshaw as a blind man?

Next he retired from his teaching job. He could barely navigate the campus, and considered himself a hazard to students. (The triggering event was falling down the stairs and nearly injuring bystanders.)

The strain took its toll on family life. Stevens’ marriage ended in divorce, and he suddenly found himself in the role of single dad to his two youngest daughters, who were still in their preteen years.

Times were tough, to put it mildly. With help from the Blind Rehabilitation Services of the U.S. Department of Veterans Affairs (VA), Stevens slowly learned how to take care of himself and his daughters. But he still couldn’t shake his anger.

Then in 2000, something happened that would turn his life around. It seemed like the smallest incident at the time. His daughter Megghan asked if he might be interested in studying martial arts. The idea came up because his other daughter Sara was taking classes in kenpo. Megghan was looking for a way to help her depressed dad get engaged in something … anything. Stevens initially scoffed at the idea, but he was intrigued.

The instructor, too, thought Stevens must be joking when he proposed joining the class. “He said, ‘If you’re serious, I’ll teach you, but if you’re pulling my chain, I’ll knock you on your backside, old man,'” Stevens recalls with a laugh. “I guess I must not have been respectful enough because he did knock me on my backside more than once.”

For the first seven months, Stevens came to the studio and did nothing but sit or stand still and listen. He learned to recognize the direction of the slightest sound as well as to judge the distance between himself and the object or person making the sound. When he was ready, his instructor began training him in the classic Shaolin kenpo tradition.

After two years of intense study, he was declared ready for competition. The catch was he had to leave the cane at the door. His instructor told him he would have to compete on even terms with his sighted opponents or not compete at all. No one would be told he was blind–not his opponent, not the judges, not the audience.

The fights were brutal. His injury list included a broken nose, three cracked ribs, a torn left rotator cuff, and a dislocated left knee. After five matches, Stevens emerged victorious. “At 52 years, I was the oldest man ever to win the men’s fighting competition at the Martial Arts Tournament of Champions,” says Stevens.

He was also the only blind man ever to win it.

As his martial artistry grew, Stevens slowly returned to his first love, the fine arts. At the urging of his instructor and his children, Stevens patched up his studio and began to create anew. His first piece, an ivory carving of a wizard, took 900 hours to complete. Even with the help of special lenses that make carving and scrimshaw easier, he estimates the piece took about twice the time it would have taken prior to losing his sight.

But as time passed, he got faster. “When he first started, it was very slow and frustrating because he had to relearn how to do things,” says Megghan. “Now, I see him cruise right through a new project like it’s no problem at all.”

Today, Stevens’ work appears in galleries across the country and has been commissioned and sold to private collectors around the world. Recently, he was honored as a Kennedy Center Registered VSA Artist in both the visual and literary arts.

“Once I found my art again, I didn’t feel quite so useless,” Stevens says today. “I no longer sat around wondering, What’s the blind man going to do today? I became too busy.”