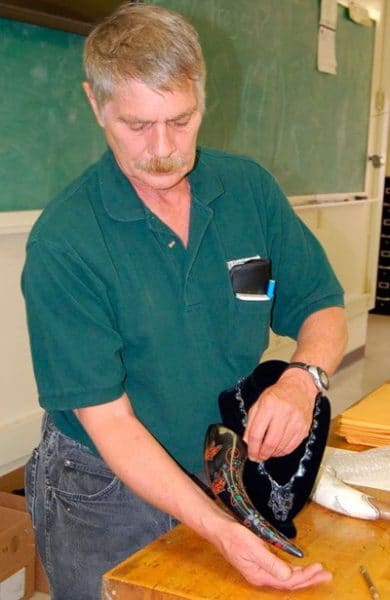 Jim Stevens is a master scrimshaw artist who is now in his ninth year as a summer instructor in the Trinidad State Junior College Gunsmithing Program. Stevens teaches his students how to use fossil ivory, silver and other materials in decorative designs that are inlayed into gunstocks, gun-barrels and powder-horns, adding to the work’s beauty and value while improving the students’ chances of success in the highly-competitive world of gunsmithing.

He creates these intricate artworks and passes on his skills to a new generation while being legally blind.

Stevens was wounded in the head during combat during the Vietnam War. His sight remained unaffected by the injury until 23 years later, when he suddenly lost 98-percent of his range of vision. He uses special visual lenses and a well-developed sense of touch in his work as a scrimshander, the term used to describe those who do scrimshaw work. He’s unable to drive, but his son, J.T., takes care of that and works with his dad as a fellow scrimshaw instructor at TSJC.

Scrimshaw art became famous as the pastime of Yankee whalers plying the world’s oceans in the eighteenth and nineteenth centuries. The whalers carved intricate designs into whale jawbones, whale teeth and walrus tusks, then filled the designs with pigment to reveal a beautiful work of art. Stevens said the oldest examples of ivory art found in North America date back to at least 100-200 A.D. Though examples of ivory art thousands of years old have been found in many cultures across the world, it’s the scrimshaw of the Yankee whalers that gave the art form its name, and is most highly prized by collectors. President John F. Kennedy was one of the most famous scrimshaw collectors in the United States, and had scrimshaw on display in the Oval Office at the White House. Stevens said President Kennedy was buried with his favorite scrimshaw piece, a gift from his wife Jackie.

Stevens said scrimshaw worked its way across the globe because of the whalers, who hunted the leviathans in all the world’s oceans. Whale oil was the petroleum of its day, used for lamp oil and for many other purposes. The technique spread to soldiers in the French and Indian War from 1753 to 1756, who learned how to carve the designs onto their powder horns. It’s a technique passed down from father to son through many generations, and is described by Stevens as the oldest American art form.

Stevens displays and sells his scrimshaw pieces at his studio in Denver, The Scrimshaw Studio, and at many other galleries. Examples of his artwork and how he creates them can be seen on the website scrimshawstudio.com. He’s written three books on the subject, described by one book reviewer as “the most complete technical and aesthetic books ever written in the field.” He’s been honored by the Kennedy Center for Performing Arts in Washington, D.C., as a registered Very Special Artist in both the visual and literary arts.

Importation of ivory into the U.S. was banned in 1989, though it’s legal to use ivory that was already in the country at that time. The ban was put in place to reduce hunting pressure on the world’s dwindling populations of elephants and other ivory-bearing animals.

Stevens said most of the ivory he uses is from the tusks of woolly mammoths, which became extinct several thousand years ago. He said he gets most of his ivory from Alaskan gold mines, where the tusks are found buried deep underground. He said woolly mammoth tusks are legal to buy, sell or trade anywhere in the world.

Stevens said most people think ivory inlaid into gunstocks and pistol grips is just for show, but it’s real purpose in military hardware dates back thousands of years and has a much more practical purpose. Ivory gives a soldier a better grip on his weapons, be they gun, knife or sword, than almost any other material. If the weapon’s handle became wet with water, blood or sweat, ivory allowed to him to control his weapon effectively, a crucial consideration in combat.

“If you were trying to block another fellow’s blow and your sword slipped and you were hit, you were about to have a really bad day,” Stevens said. “If they could afford it, they wanted ivory grips for that reason. Even today, for that original practicality, many collectors and weapons experts prefer ivory, and the fact that it’s beautiful doesn’t hurt.”

Stevens teaches six students in his current scrimshaw class, and said three of them want to become professional gunsmiths, while the other three want to learn scrimshaw strictly for artistic purposes. He teaches them how to use a knife and steel scribe in creating scrimshaw works. A more modern technique is called stippling, using a steel scribe to punch thousands of tiny holes in the ivory, which enhances its artistic value and its grip control. He said 99-percent of the work he teaches is handwork that is meticulous and time consuming.

Stevens is in his ninth year at the TSJC Gunsmithing School. He said the scrimshaw work is just one facet of the wider program.

“I come down each summer to teach the scrimshaw part of the program as part of the embellishing arts at the gunsmithing school,” he said. “Between what they teach here as metal-smiths and in working with the metal parts of the guns, and then what they teach here to then take that and embellish it and make it beautiful, they cover the whole spectrum of what can be done with a gun.”

Many of his students aren’t sure if they can handle the intricate work required of a scrimshander.

“They come in and tell me, “I can’t do this. I can’t even draw a straight line,’” he said. “I tell them, ‘Don’t worry about it. At the end of a week you’re going to be doing great scrimshaw. It’s not that difficult to learn, but it can take a lifetime to get really good.”

The work Stevens does and teaches is all the more remarkable considering his limited eyesight. Bullet fragments from his 1970 wound worked their way into his visual cortex in 1993, costing him most of range of vision.

“The war came back to bite me 23 years later,” he said. “The bullet fragments decided to do a little dance up there, 23 years after I was shot. It caused a stroke in my visual cortex, and I lost all but two degrees of my range of vision. I have just a pin dot of vision straight ahead. I have no peripheral vision at all. I can see your eye, but I can’t see your eyebrow. After I lost my eyesight, I retired from the University of Colorado, and sat there and thought ‘What am I going to do now?’ My kids encouraged me to take up my art work again, and I was like, ‘Excuse me? Can’t see!’ But they just kept pushing me. It took me two years to learn how to use what eyesight I had left, and to regain my skills. Since then, I’ve been very fortunate. Now I make my living at it, and I’ve had great success. I’m galleried in Seattle, in Colorado and in Rhode Island, so I’ve made a few dollars from my work.”

“They’re cut. They’re carved. They’re used to make jewelry and buttons,” he said. “There are a lot of different things that scrimshanders work on, both man-made and natural. If you do scrimshaw, they call you a scrimshander.