How To Find Your Calling (From 5 People Who Found Theirs)

Why does our culture perpetuate the belief that “finding oneself” is an age-specific phase, reserved only for angst-ridden teenagers and wanderlust-stricken 20-somethings? The notion of finding a passion is all-too-frequently aligned with youth and impulsivity, but truthfully, we’re all quietly seeking our next challenge, our next calling.

We’re of the belief that it’s never too late to course correct your life, and given the job-hopping numbers, we’re probably not the only ones. Though the U.S. Bureau of Labor Statistics does not regularly track career changes, in a recent study of late-period baby boomers it found that people will hold an average of 11 different jobs throughout their lifetime, and for some, as many as 15 jobs. (For younger Americans, that number will likely be much higher.) To help you take that eager leap, we’ve partnered with Chevrolet Malibu to bring you these courage-inducing tips for finding your passion, from five people who found theirs. 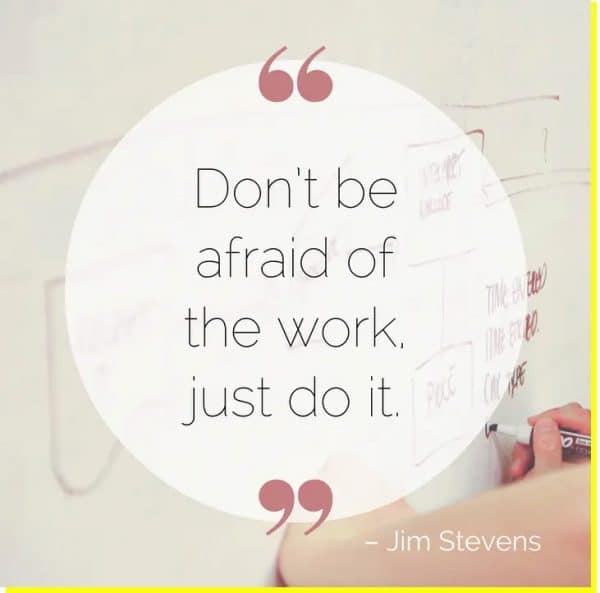 When Jim Stevens suddenly and unexpectedly lost his vision in 1993, he believed his days as an artist were over. A stroke in his visual cortex ― brought on by bullet fragments that had been there since 1970, when he was shot serving as a U.S. Army sergeant during combat in Vietnam ― rendered him legally blind, except for a small pinhole of vision in both eyes.

In the wake of the loss of his teaching job at the University of Colorado in Denver, paired with a separation from his wife, Stevens quickly sidelined his hobbyist artistic endeavors in order to raise his two pre-teen daughters as a blind, single parent. After seven years, Stevens decided that his circumstances weren’t going to hold him back from his art. “In 2000, I [was] determined to reinvent myself and become a full-time artist despite my disability,” he says. “I began by finding a variety of special lenses to help with my technical skills and then I struggled for the next two years to relearn my craft without the eyesight an artist so desperately needs.”

Stevens, who dabbled in art from a young age, remembers watching his grandmother create drawings and watercolors; he was fascinated by the way in which a mind subjectively captures an image and recreates it on canvas. Since 2000, his work has been featured in galleries across the country and he’s written three books on art. “I lost my eyesight in just 30 minutes,” he says. “My career, my wife, my future, and my self-worth soon followed. I finally had to accept being blind, but once I did, I also accepted the fact that to have a life, I would have to reinvent my life.” 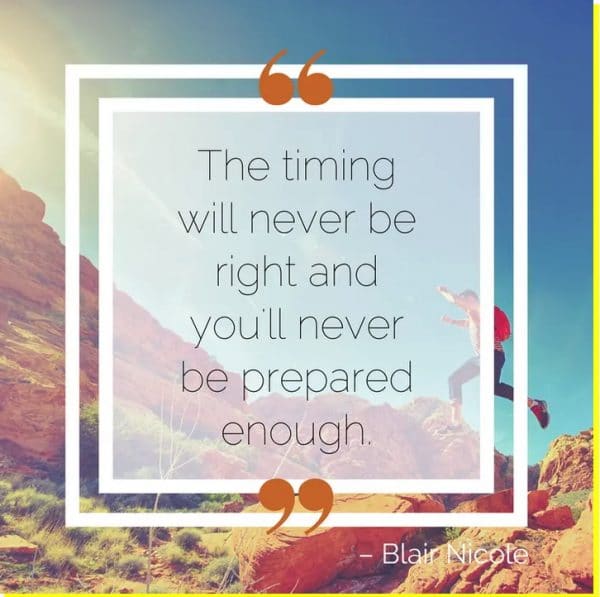 Eight months after her stepdad passed away in 2010, Blair Nicole knew it was time for a change. She was working a comfortable job as a stockbroker, but felt an itch for change that just wouldn’t calm. She began packing up her stuff and walked out.

Fast forward five years, to the summer of 2015, and that same itch settled in after the end of a long-term relationship. “I’d always toyed with the idea of traveling and working remotely, and knew the only way I would do it is if I just jumped in,” Nicole says. “I immediately started selling my furniture and belongings, and started booking plane tickets. I haven’t looked back.”

Since last August, she’s been living life as a “digital nomad”, as the CEO of her own PR firm. She and her 4-year-old son Dominic have been to nine states, over 30 major cities and two countries over the past 10 months, and have been checking items off their bucket list left and right, like skydiving in San Diego, hang gliding in Draper, Utah, and reveling in Times Square on New Year’s Eve. “People always ask me how I do it, but you’d be amazed how adaptable people really are when they’re committed to a situation or outcome,” she says. “The secret is to just jump in and find a good support network to help you and encourage you along the way.” 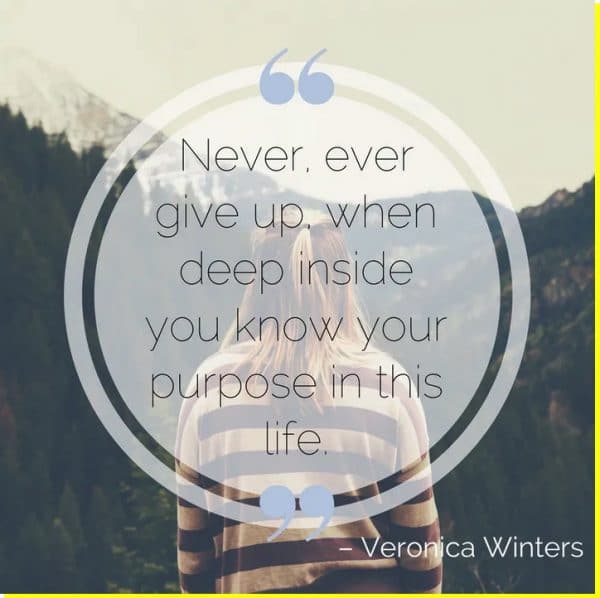 Veronica Winters moved from Moscow to the U.S. in the late ’90s “with one suitcase and lots of naiveté,” she says. She began taking art classes ― which eventually led her to pursue a BFA and MFA ― to break up the monotony of housework when her son was born, but being an introverted foreigner proved its own unique challenge. “The next two years after graduation were the hardest time in my life,” she says. Winters had “no connections to become a successful artist. There were hard times, and late at night I often thought of giving up and just letting it go.”

Once her son was in middle school, she began commuting from Pennsylvania to New York for additional painting and drawing classes. She eventually started teaching classes from her own in-house studio, but without the promise of anything long-term or stable. She relocated to Florida ― for what was a time “of soul searching and solitude,” she says ― and her family shortly followed.

Though it’s been a long, often stressful road, Winters says she’s learned the irreplaceable value in listening to intuition. Her work has been featured in various art magazines and publications, and she frequently has pieces commissioned. “I’ve decided to take charge of my life, to find strength within me, to have concrete goals to achieve results that I could live with,” she says. “Do what’s right for you, and not necessarily for everyone else around you. You can’t make everybody happy if you are not happy yourself.”

At 15, Crystal Rice dropped out of high school and ran away from her Maryland home, where she lived with her father. It was the dead of winter, and she was living in a tent in the middle of the woods, and stealing food from grocery stores to get by. After a brief stint staying with her then-boyfriend (unbeknownst to the rest of his family), she ended up in southern Virginia with her mother.

Fast forward several years, and she ultimately put herself through both undergraduate and graduate school, pursuing her life’s passion: psychology. “I loved that psychology got down to someone’s core, past all the persona and masks that people wear,” she says. But after starting a family of her own and being the primary breadwinner in a higher paying, more reliable profession, she fell into what she calls Batman Syndrome. “By day, I was a mild mannered IT project manager. By night and on the weekends, I was trying to keep my head in the psychology field one way or another.”

Because of her difficult past, Rice found strength and happiness doing one thing: helping others be happy, through therapeutic consulting, where she’s blended both her passions and her skills. “I am a strong believer in the concept of balance,” she says. “If everyone followed what paid the most, or only wanted the “sexy” jobs, then our society would fail. Following your passion provides the world its balance, and trust me when I tell you it will provide balance in you as well.” 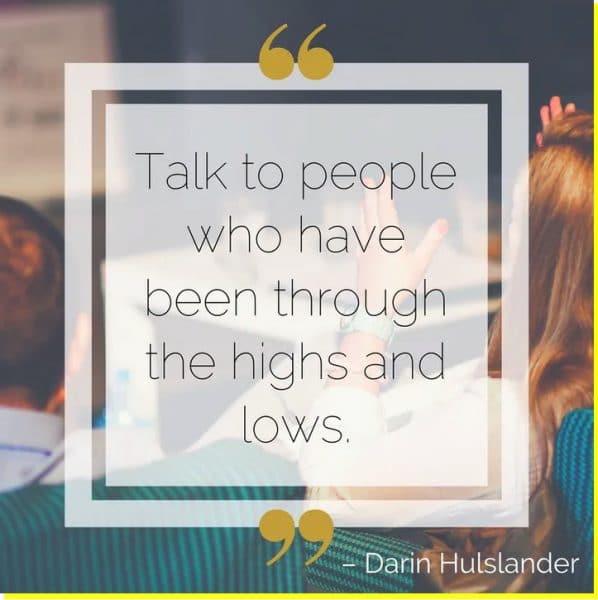 When his mother, Nancy, was diagnosed in 2012 with Stage 4 cancer in her sternum, the last things that Darin Hulslander was concerned about were her exercise and fitness habits. Yet in order to undergo surgery to remove the tumor, she had to strengthen her heart. She hired a personal trainer for three months and set to work.

After the surgery, she was encouraged to undergo chemotherapy, but decided against it. “She’s elderly and didn’t want to spend perhaps her final years in chemo and in pain,” Hulslander says. “She focused on improving her diet by eating whole foods and working with a nutritionist. Six months later they did an MRI and couldn’t find a tumor on her.”

Today, Hulslander has dedicated his life to helping others heal through fitness and nutrition, because he witnessed it work firsthand. “The doctors had no clue about how it could have happened and still don’t,” he says. Her pursuit of a better life helped transition my career into a full-blown business. It truly became my calling when you see the person you love most heal themselves through exercise and food.”