“My childhood vision was art, but it took a war, a stroke, and two little girls to finally make me see things as clearly as I did when I was a child.”
~Jim Stevens 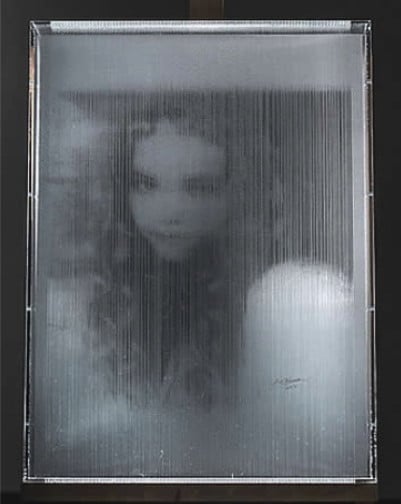 Jim Stevens is a man who defies logic by creating images in empty space. On strands of monofilament (fishing line), the artist paints ethereal images that have been mistaken for holograms and referred to as “captured shadows.” Stop and think about that—he paints on fishing line! You can see the image, but with spaces between the strands and separation between each row you also see through the image. Hundreds of strands hang in eight separate rows within an acrylic encasement. Each strand a thin, essential piece of the whole. Viewed individually, you’d see nothing. Combined, what you see is amazing.

When Stevens was a young boy he was fascinated by his grandmother’s talent, and her art supplies, so one day he decided to sneak into her studio and take a piece of charcoal and some paper. Fearing she might not approve, he went around the side of the house, sat on the ground, and began to draw. “I don’t recall what I was trying to draw—a dandelion or some little flower. I was sitting with my back to the side of the house when all of a sudden this shadow comes across the paper. Uh oh! But instead of being mad, I heard a voice say, ‘Well, if you really want to know how to do that, you might as well come in the house and let me teach you.’” 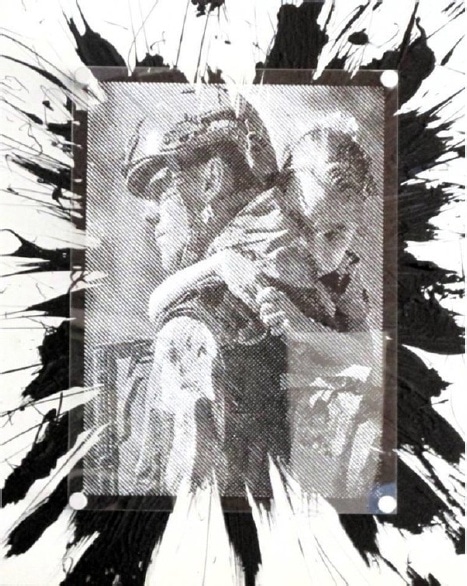 When he was about seven years old, his dad asked him what he wanted to be when he grew up and Stevens said he wanted to be an artist and writer. “My father exploded. He cursed and swore no son of his was going to grow up to be a starving artist in an attic somewhere!” His father’s reprimand left an impression on him, in the form of bruises. Lesson learned.

At seventeen, he joined the Army. By eighteen he made staffsergeant. Only one year later he was shot in the head during a combat mission in Vietnam. It left bullet fragments in his head and one month after being shot, he began having debilitating migraines. Twenty-three years later, during one of those migraines, blood vessels expanded and caused one of those bullet fragments to shift, blocking blood ow, and resulting in a stroke in his visual cortex. He was left with only pin-dot vision in both eyes. “I lost my eyesight in just thirty minutes. My career, my future, and my self-worth soon followed.”

Life felt miserably dark without sight and anger fueled his days. “I took a crowbar to my motorcycle, destroyed my art, and almost anything else I could get my hands on.” After his divorce, adjusting to life as a blind man while raising two young daughters on his own seemed like a daunting task. He remained stuck in the mire of despair and indigna-tion for a few years. This was a side of their father his girls had never seen. They could remember a time when Dad had a passion for all things, especially art. When Sara was thirteen and Megghan eleven, they began encouraging him to get back to the art that he loved so much. Even as young girls, Megghan says they knew “he needed to focus that anger and put it into something constructive. We knew it would be dicult and he might not be able to do some of the things he used to do, but it would at least be an outlet for him.” 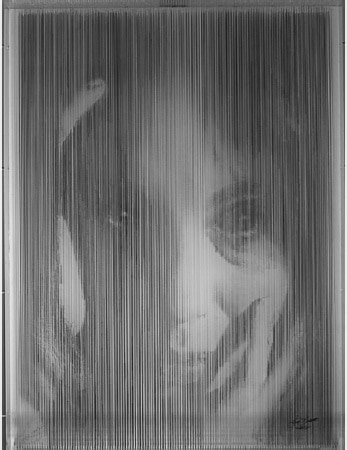 Art?  Impossible, he thought. He was blind. But the girls persisted until he promised to try.

Megghan already knew what she wanted Dad to do—she wanted a carving of a wizard with a big hat and beard. Stevens selected a piece of ancient ivory and began to carve,  but unable to fully see what he was working on, one day he became so frustrated he threw it across the room. “How am I supposed to do this?” he snapped. “I can’t see!” Megghan picked it up, brought it back, and set it down in front of him. “Daddy, you promised not to quit.” Abased, he held the ivory in his hands. Using his sense of touch and a huge dose of patience, he began again. With only pin-dot vision he learned to rapidly scan his eyes to help see the subject. It took 900 tedious hours but he persevered and completed the wizard. Megghan, now an adult, still has it.

After learning to carve again, he turned his attention to drawing. “Gradually, over time, I taught myself how to draw, paint, and do scrimshaw again.” Using five different lenses, he learned to switch from one to another as he worked, constantly scanning, and maintaining focus. “The more I worked, the better I got and the more people no-ticed, the busier I got. It took four long years of dedicated  practice, work, and persistence, but one day I realized I had finally become so busy with my art I forgot to be angry.”

At home one day, Stevens heard his six-year-old grandson calling for help in the back yard. “He had his toy fishing  pole and a huge bird nest of tangled monofilament line and I thought, Oh yeah. The blind guy’s gonna help the six-year-old untangle this.

But as I was trying to help him the clouds went overhead and the monofilament on my fingers seemed to ripple. I saw that. It was a gorgeous effect and I couldn’t get it out of my head.

”He spent the next five months trying to work with the monofilament in different ways to create art. Many attempts ended up in the trash but through trial and error, he learned with each effort. Eventually he found a way to etch and then  paint with acrylic directly on the monofilament. More than one hundred painted strands, strung side by side, create one layer of the image. He paints eight layers of the same image to complete a painting but he shades each layer differently to create depth. Once all of the layers are painted, he transfers the strands, one at a time, into a clear acrylic case. Each layer offset slightly. “My monofilament paintings are not flat visual experiences. They are interactive, engaging both the eye and the mind’s sense of wonder.” On average, it takes two months, working ten hours a day, to complete one monofilament painting. His favorite one to date is the one of Megghan. He says, “It is the first monofilament painting I got right,” and it hangs in his living room. 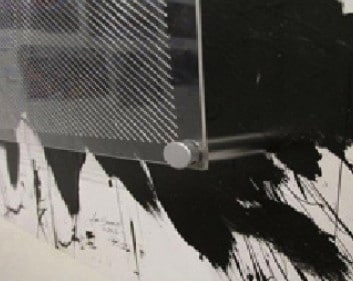 Close up abstract linear painting: Images are painted with irregular lines on a clear acrylic panel that is then mounted over a black abstract painting on a Komatex panel. The linear image painted in white only becomes visible when layered over the black abstract background.

Close up monofilament painting: An average of 450 yards of monofilament line (roughly 129 strands across, 8 layers deep) is shown here within an acrylic case. 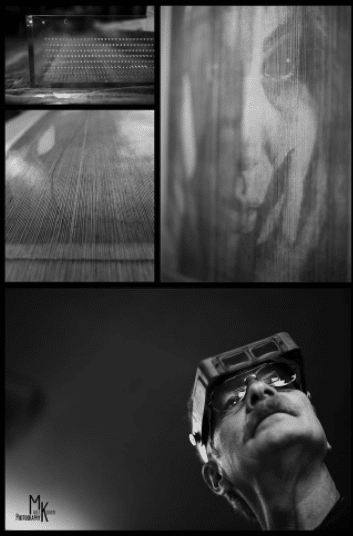 Collage image showing part of the acrylic case for a monofilament painting, strands of one layer on a layout board, side angle of Embers, and photo of the artist using an Optivisor.

Needing more and more room to work, the artist eventually converted his two-car garage into a studio. His grandson’s toy fishing pole now hangs there in a place of honor.

In addition to the monofilament paintings, which have earned him multiple awards, he also creates what he calls abstract linear paintings. Because he sees the contrast of black and white best, he starts by creating an abstract painting with black paint on a smooth Komatex panel. Separately, on a clear acrylic panel he paints a realistic image with white lines, leaving the negative space transparent. When  both paintings are complete, the acrylic panel with white  paint is mounted in front of the abstract painting with black  paint and the shading that creates the image is revealed. A finished image appears only when the two elements are combined. Slide a piece of white paper between the paintings and both the shading and the image seem to vanish. Realism and abstract art are combined to create one striking image that is actually seen through empty space—one with-out the other and it is incomplete. 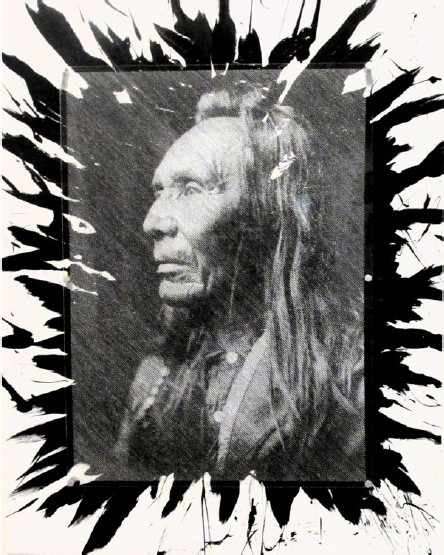 Megghan is now her dad’s personal assistant; helping with whatever is needed, including scheduling her father’s time and working to find new venues for his art. She is grateful to the folks at Veterans Affairs Recreational Therapy for encouraging him to develop his art and for displaying his work just as other venues do in their art exhibits. She says, “It is important to me when someone sees his work that they see it based on its own merit. I don’t want them coming to a show to see what a disabled person does. I don’t want that to be the headline. I want the work itself to be the headline. Then, by the way, you learn about the artist and his history and what he’s gone through. It doesn’t define his ability.”

Stevens emanates perfectionism. If he’s going to do it, he’s going to work hard to do it right. If he doesn’t do it right the first time, he’ll keep trying until he gets it right. Not just as an artist, but in life. After losing his eyesight and finally  pursuing his art again, his daughters also encouraged him to try martial arts. A blind man pursuing martial arts? Why not?! He earned black belts in two different disciplines and at 51 he became the oldest man, and only legally blind man, to ever win the men’s fighting competition at Denver’s multi-state Shaolin Kenpo Tournament of Champions in 2002. His sensei made sure no one knew he was blind until the competition was over. “I left the tournament with a broken nose, three cracked ribs, a torn rotator cuff, a dislocated knee, and first place trophy as tournament fighting champion.”

He doesn’t practice martial arts anymore but he stays busy with his art and involvement with two nonprofit organizations—A3 and VFW Post 1. Stevens serves as a board member and treasurer for A3: Adapt • Adjust • Achieve, a chapter of the American Council of the Blind. He is proud that they take an active role in assisting people with vision impairments in their homes, the environment where they need to live and adapt, with the assistance of aids and training. He is also the director of the Veterans Arts Council at VFW Post 1 in Denver, the first and oldest VFW post in the country, where they don’t have an open bar—they have an art gallery and yoga instead. “We mentor and work with veterans who are also artists or would like to be.” VFW Post 1 is strategically located in the middle of the Arts District on Santa Fe in Denver and their gallery showcases art created by veterans and promotes the sale of their work. 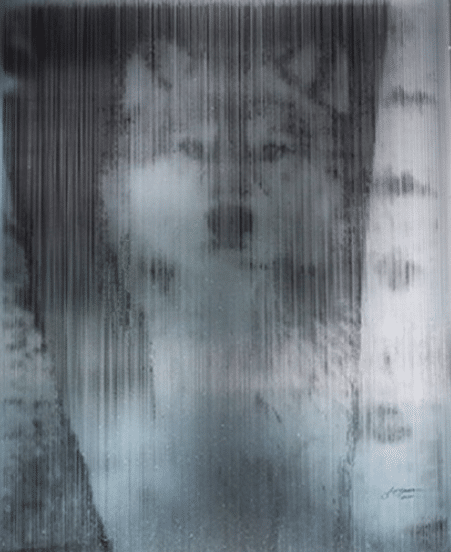 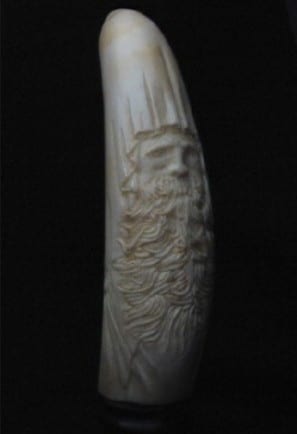 His aspirations to become an artist and writer have come to fruition despite his father’s stern admonition. The award-winning artist has received acclaim for his intriguing monofilament and abstract linear paintings. He has served as the master scrimshaw craftsman for Fenton, a jewelry design studio based in New York, and he has written three comprehensive books on the art of scrimshaw. It took many years, and the encouragement of “two pesky little girls,” but he achieved his dream. Fragments, slowly pieced together over a lifetime, have revealed a true artist.

To see more of Jim Stevens’ work visit www.scrimshawstudio.com. Kaleidoscope first learned of the artist by watching a PBS Newshour video online. To see the video and get a closer glimpse at his intriguing work, go to http://to.pbs.org/2p8oDfG.