“The Honorable Company of Horners – ones who inspire”

During the time that I have been editor of The Horn Book, some very interesting and inspiring stories have been brought to my attention. Those that peak my interest are about individuals that have overcome major adversitie in life. Significant obstacles were placed in their life’s pathway, but through determination, perseverance an fortitude they went on to become successful in every sense of the word.

There are two such individuals in our Guild that I would like you to meet. One is Jim Stevens, who you will read about in this article, and the other is Fred Noesner who you will meet in the Winter 2012 issue. Their stories will simply amaze you. –– WEC 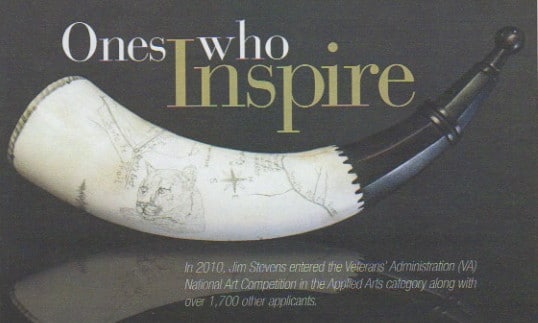 The VA competition is a year long and starts at the state level, moves on to regional judging, then national judging, and finally concludes with a one week festival where visitors can view the work of the National 1st Place winners. Jim’s entry was an engraved powder horn that he entitled “Colorado Rocky Mountain Powder Horn” which won the national competition.

The foundation for this remarkable achievement started as a young boy in Texas when he developed an appreciation for art through his grandmother who taught him to draw using charcoal on paper. Later in life, ivory presented him with a new kind of canvas which he enjoyed transforming into various designs. From there he went beyond carving and taught himself scrimshaw using ivory, bone, sea shells, antlers, whale teeth and horn. Although the result culminated in his winning the VA National Art Competition, which in itself is quite an accomplishment, his path to achieving this honor is even more remarkable.

We’ll begin this journey in 1968, when a high school dropout with a GED joined the U.S. Army and as many young men of that period, ended up going to Vietnam. In 1970 while on a combat operation, Jim was shot in the head that left him with debilitating migraines possibly due to the bullet fragments that Army surgeons could not remove. He returned to his Long Range Reconnaissance Patrol unit just two weeks later, but the side effects of that wound would follow him the rest of his life.

He left the Army after 11 years of service and opened an underwater diving business that specialized in underwater power plant maintenance and repair. However, the pain he endured from the migraines forced him to seek yet another career to support his family.

He was determined not to let the migraines ruin his transition from the military back into civilian life. He began working at a refinery as a precious meta separations chemist, a specialty skill that was self taught. Due to his always underlying artistic talents, he developed an affinity for ancient mammoth ivory which miners unearthed as they dug deep for gold. Result, Jim began shaping broken bits of tusks into works of art and was soon selling these sculptures to art galleries.

Then in 1993, a migraine struck that caused the stroke in his visual cortex, leaving him legally blind in just 30 minutes, tiny pinpricks of light his only sight. This further resulted in his losing his position as a professor at the University of Colorado and due to the severity of the change that was taking place in his life, he also stopped creating art.

His life was on a downward spiral when in 1998 he was introduced to the martial arts under the guidance of a patient yet no-nonsense instructor who made him see all the possibilities beyond his disability. This was yet another major turning point in Jim’s life.

In 2000, after adapting his technical skills with special lenses to work with his disability, Jim began to slowly and patiently relearn his craft and once again started producing art. He struggled for two years to recover his skills; he stated that “despite frequent discouragement I refused to give up…and that persistence changed my life.”

Today Jim is an internationally collected custom powder horn maker and American scrimshaw artist and sculptor whose work can be found in art galleries across the country. He has written three books on the art of scrimshaw technique and powder horn making published by Schiffer Publishing. He has also won both First Place and Best of Show awards at several juried competitions.

Jim has been making horns for over 30 years and is most interested in custom western horns with fine art in scrimshaw and inlays. In addition to being a member of the Honorable Company of Horners, he is also a member of the Contemporary Longrifle Association, The American Bladesmith Society and The Knifemaker’s Guild.

Aside from his accomplishments, two items give you a greater insight into Jim’s character. First, he has a sign in his shop which is a direct quote of his that reads: “A man with a vision is never truly blind.” Second, he charges for classes taught publicly, but he stated, “I never charge apprentices who want to come to my studio and learn. We always become friends and you don’t charge your friends. I also freely answer email questions (as best I can) about scrimshaw and horn working. I make new email friends all the time who I always enjoy corresponding with.”

We are fortunate, indeed, to have someone of Jim Stevens’ caliber as a member of the Honorable Company of Horners 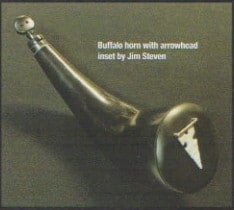 Note: To see more of Jim’s work go to www.scrimshawstudio.com. The three books he has written include Powder Horns: Fabrication & Decoration, Scrimshaw Techniques, and Advanced Scrimshaw Techniques. All are well written, have excellent photographs, and should be in every horner’s workshop.