“Out of the darkness”

JIM STEVENS ACTED AS THE EYES OF THE ARMY FROM 1968 TO 1979. WHILE SERVING A TOUR IN VIETNAM, HE WAS PART OF A SIX-MAN TEAM THAT WENT DEEP INTO ENEMY TERRITORY TO COLLECT INFORMATION. DURING A COMBAT RECONNAISSANCE MISSION IN 1970, STEVENS WAS SHOT IN THE HEAD. 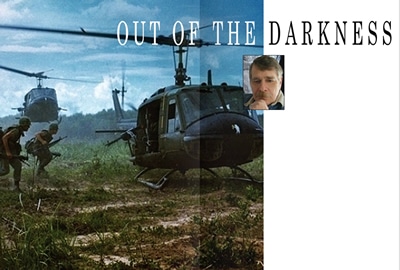 Long Range Reconnaissance Patrol leaders in action in Vietnam.
Stevens traveled all across the country. Photo by U.S. Army.

Twenty-three years later, residual shrapnel stole his eyesight. Stevens had returned to civilian life; he was teaching English and Employment Law at the University of Colorado, had a family, and was enjoying art as a hobby. Stevens’ art included drawing, sculpting, and scrimshaw – carvings done on bones or ivory. While preparing lesson plans on the computer, Stevens was suddenly overcome with a migraine, and words started disappearing from the screen.

His vision blurred and suddenly darkened until he could see almost nothing. For years, Stevens had been plagued with migraines caused by the bullet fragments in his head. This particular migraine caused a stroke to his visual cortex. Stevens permanently lost all but a pin dot of sight.

Within a year of going blind, his wife left the family, he became a single parent of two young daughters, and he lost his job and the confidence to continue his art.

Stevens succumbed to loss and anger. In a fit of rage and desperation, he destroyed most of his unfinished art — precious paintings, drawings, sculpture, scrimshaw — with a baseball bat.

“I had to fight this war twice,” Stevens said when he recalled the battle he had to face after going blind.

For the first seven years after losing his eyesight, raising his young girls was about all he could focus on. “I was a pretty miserable individual,” he recalled. Stevens said he had to accept the fact that to have a life, he would have to reinvent his life. Helping his daughter cope helped get him on his way. While Stevens struggled to adapt to his new life, so did his oldest daughter. He decided to enroll her in martial arts in order to learn some self-discipline. It worked so well that Stevens’ other daughter encouraged him to try it as well.

It was then that he turned to martial arts to help him overcome his anger. For the first seven months, his sensei (martial arts instructor) helped him learn to listen and recognize the direction of the slightest sound as well as judge the distance between him and his opponent. This allowed him to learn how his opponent moved and how to defend himself.

After two years of intense study, Stevens earned the rank of brown belt and professed he was ready for competition — but his instructor told him he also had to be ready to leave his cane at the door and compete on even terms with his sighted opponents or not compete at all. Entering the competition, no one was aware that Stevens was blind — not his opponents, the judges, or the audience. After a series of brutal fights, Stevens was left with a broken nose, three cracked ribs, a torn left rotator cuff, a dislocated left knee, and a championship trophy. His 18-year-old opponent didn’t learn he was blind until after the tournament.

Today, Jim Stevens is the only legally blind man to win the men’s fighting competition in the Martial Arts Tournament of Champions. In addition, he achieved the rank of black belt in just four years.

His sensei told him that martial arts is an art as well, and that art teaches art. He encouraged Stevens to go home and start creating, sculpting, painting, and drawing again. Stevens has enjoyed art since childhood when his grandmother taught him to draw with a piece of her charcoal and sketching paper. He honed his skill as an adult when he studied with master sculptor Ed Dwight. Stevens experimented with lenses that allowed him to work using the mere pin dot of vision he had left.

“At the same time my sensei recommended getting back into my art, the VA recreational therapist, Ron Davis, was pestering me to get back into art as well,” Stevens said. He had always enjoyed art as a hobby but never considered its therapeutic value. After getting a few pointers from Davis, he finally decided to start again.

“Recognition from the art community and the veteran community
says more than all the private gallery shows I have won.” –– Jim Stevens

When he tried his hand at art again, his daughter demanded he try his best and not quit until he carved a wizard in ivory for her.

Stevens went back to his scrimshaw. Although it’s not easy for anyone — blind or sighted — he thinks it’s the perfect art for him because he etches small dots into ivory and all he can see is a pin dot anyway.

“Sometimes I would get so frustrated, I would throw a piece across the room,” Stevens said. “My daughter would pick it up and bring it back and remind me I promised not to quit. It took me two years, but I carved that wizard,” Stevens beamed with pride when recalling the moment he completed the piece. It remains the only piece he refuses to sell.

Eventually, he started creating pieces as gifts for family and friends. Using a variety of specialty lenses, he kept working and re-learning the craft with limited eyesight, a major challenge for any artist. After a long learning process and finally being satisfied with his work, Stevens agreed to do a commissioned piece. “I was scared to death,” he said.

Before he knew it, word spread, and Stevens was receiving requests from people all around the world. Today, his work can be found in galleries and collections in the United States, Canada, Europe, South Africa, and Russia. His clients range from private collectors to colleges and museums. “I just kept working and suddenly was too busy to be angry anymore,” Stevens said.

“Creativity is the human capacity to grow, solve problems, and even change behaviors. Through creativity, the arts can and do change lives every day,” Stevens said.

In 2010, the John F. Kennedy Center for the Performing Arts recognized Stevens through the VSA registry list in visual and literary art. When founded in 1974, the organization was named the National Committee — Arts for the Handicapped. In 1985, the name changed to Very Special Arts, and in 2010, it became VSA. Stevens is one of 1,700 artists recognized with the honor from the international organization on arts and disability founded by Ambassador Jean Kennedy Smith to provide arts and education opportunities for people with disabilities and increase access to the arts for all.

“I’m so very lucky,” Stevens said. “My work is collected all over the world; I have three published books and am listed at the Kennedy Center.”

Although Stevens is an acclaimed international artist, nothing gave him more joy than when he won gold medals at the National Veterans Creative Arts Festival in 2010 and 2012. 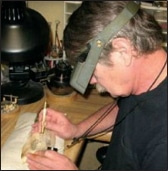 “The recognition from both the art community and the veteran community rolled into one says more than all the private gallery shows I have won,” Stevens said. “Because an enemy bullet took my sight and this was a veterans event, when I won, it was a ‘Yes’ moment.”

Susie Clyde, ALA Veterans Affairs & Rehabilitation Committee Northwestern Division chairman and NVCAF volunteer, agrees that the program gives veterans a sense of personal achievement and self-confidence. She said the incidents that brought the veterans to the VA programs were heartbreaking and yet heartwarming that they have overcome so much.

“The same recreational therapist that hounded me to get back to doing my art thought I should enter the contest,” Stevens said. “He is a persistent bugger.”

Showcasing his art at NVCAF was a goal Stevens set for himself in hopes that he would eventually be good enough to participate. He said he never could have foreseen all of that success when he started his art again in 2000. “I wanted it but certainly didn’t think I would win,” Stevens said. “Not everything I enter wins.”

“About the time you think you are good, you are put in your place,” he said. “It does wonders to make you go back and try again the second time.”

NVCAF volunteer and VA&R Committee Southern Division Chairman Susan Lee, herself an educator, said that NVCAF gives veterans a goal to achieve. “This program is very beneficial to our veterans,” Lee said. “It helps them be goal-oriented and enables them to share their talents and skills with others — both veterans and the community at large.” Stevens was one of 55 visual artists and 69 performing artists chosen from 3,725 veterans representing 130 VA facilities who originally entered categories within the divisions of art, creative writing, dance, drama, and music. His piece titled “Biafra” won the Special Recognition Physical Disability category.

“Seeing the work here, you can’t help but leave inspired.”

Though Stevens still struggles with certain limitations, there is very little he hasn’t at least tried. He helped launch a website, rewired his home office, and re-roofed his garage — all after losing his eyesight. In the process, however, Stevens also tumbled off his garage, prompting a stern warning from his doctor. “I gave myself a hernia and wound up at the VA hospital. The doctor looked at me and said, ‘Jim, you’re blind. We don’t want you on the roof.’”

Still, Stevens says he is happy with his life. “It has been a long process, but I have finally re-mastered the skills I once had. The art and the quality are finally there again. After years without art, once again, I love what I do,” he posted on his website at www.scrimshawstudio.com.

“Outside of my art, I enjoy my children, my writing, and my continued study of the martial arts,” he said. Stevens, who attributes his success to persistence, offers this advice for the rest of us when the going gets tough “When you get discouraged, remember what my daughter told me ‘You promised not to quit.’”

It doesn’t appear that Stevens will be quitting or slowing down anytime soon. Three-time Emmy Award winning screenwriter Paul Cooper recently completed a screenplay about Stevens’ life. According to Cooper, “It’s a story that needs to be told.”