“The art of seeing with Jim Stevens”

I first met Jim at a gallery opening at Georgia Amar’s Habitat Gallery & Studio. I remember just going over to pop in and say hi, and being immediately fixated on the new art I saw being displayed. Figuring out how it worked, how it was made, I searched for the artist and when I was escorted to a blind man; I was a bit confused. Jim Stevens, a blind artist living in Denver, is the man behind these incredible 3D images that make every single person’s head stop and turn.

Jim wasn’t always blind. He grew up with eyesight and with a passion for the arts & writing. It’s funny how things come full circle. If Jim hadn’t of gone blind he wouldn’t be where he is now, producing the art he’s producing in the style he’s invented. Likewise, there would be no art similar to what he’s producing if he still had eyesight. Jim’s life story is one of the hardest ‘would you rather’ situations one can think of: would you rather be seemingly unknown with vision, or lose your eyesight in order to flourish. 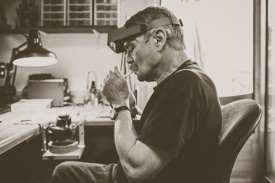 I sit down with Jim in his studio space, “the only place I’m allowed t
smoke my cigarettes” to watch his craft in the making.

Jim’s childhood wasn’t the easiest or most delicate childhood. His love for art wasn’t welcomed by his father: “No son of mine is gonna be a starving artist or an addict.” Despite those words or the unwelcoming attitude, Jim had an inherent interest in art. His grandmother noted this interest one day while Jim was playing with her art supplies and figured she could ‘make some use out of a little boy’ by teaching him how to work with charcoal and pastels.

Fast forward into a young adult. Jim was still interested in art, but wanted to be a writer. He would read through encyclopedias just for the love of words & language. Through school he studied English and writing while still finding ways to learn different forms of art. He picked up on oil painting, sculpture, and oddly enough, stone carving. Jim studied under very prestigious artists like Ed Dwight and Vasily Konovalenko. He remembers spending all day in a museum just watching Konovalenko work away at his tiny gem and stone carvings, finally building up the courage to ask him how he does it and if he can help. Jim went home and sculpted something on his own, as instructed to in order to see his skill level, and from that one piece he was accepted as an understudy to learn his craft. Seems like whatever Jim tried, he was good at it.

In the bits and pieces you pick up from Jim while talking to him, you’d never expect his life to be so random and organized at the same time. Seems like every detail had it’s place, although it wasn’t known to him at the time. Jim’s done it all; from working on stone carving, to being in the special ops in the army, to underwater welding! Talk about building a strong resume. As I sat down with Jim and spoke to him about his life and experiences, gathering information about his life you realize how nonchalant and grateful Jim is for each little aspect he’s been through, because it carried him to where he is now.

While serving in the army, Jim was hit by a bullet. “Kiss my ass, I’ve been hit!” he said. A bullet had ricocheted up his body and into his skull. Through two tours in the army, and some intense special ops work during and a little after, this never affected him. Jim went on living his life, taking what he gained in the army and using it to move him forward. He got into underwater welding and really excelled at that job, finding it both challenging and extremely calming to be in that environment doing specialty work. (*I want to note here that Jim had no idea what he was doing when he decided to try putting on a suit and going welding underwater for the first time. His success in this career as well as in life is in large part due to his curiosity and intention alone*)

After the welding started to take it’s toll on the human body, Jim suddenly found himself at a crossroads yet again in career and life. He got a job working at a chemical refinery dealing in precious metals. It was at this job where he had access to many gems and stones, including ivory. One night while working he asked a supervisor if he could take home some ivory just for fun. The super, thinking nothing of it, was beyond surprised when he showed up the next morning with a returned piece of ivory that had been beautifully sculpted by Jim: a dolphin cresting a wave (Jim notes that he had seen the image in his head when he picked up the ivory and just HAD to get it out). To Jim, this was just an excuse to do something creative (remember he had a brief background sculpting with the world’s greatest) but to his boss, it was much much more. That was Jim’s last week working at the refinery.

From then on, Jim was doing unique and extensive commission jobs sculpting for important people. It was shortly after this when Jim decided to get back into his love of words, writing, and English language. He started teaching at the University of Colorado and was happily educating others and loving his next phase.

One day, out of the blue in 1993 Jim gets a ripping headache while editing papers and finds himself waking up in the hospital. A doctor informed Jim that a bullet fragment from the war had finally moved and within 30 minutes had taken his eyesight from him. “Excuse me but I was in the war already and gave, sir”… “Well Sarg.. you just gave again..”

How is that possible? To be living your life – war is just a memory; and all the sudden twenty years later it wakes up from it’s slumber only to be very real to you all over again. Jim was angry as anyone would be. It’s heartbreaking and leaves a person thinking ‘now what?’ a few times more than once. His daughters pleaded with him to get back into art.. but to him.. what would he do, he’s blind?

For 7 years Jim was dealing with blindness before he decided to take the reigns on his life once more. He knew he wanted to do art, to make his daughters proud, to inspire himself again but didn’t know how. One day, his grandson playing in the yard with a toy fishing pole asks Jim – a blind guy – to help him unravel the knot. It was this stroke of luck, this fishing wire and sunlight and texture that played with Jim for days. This fishing wire was the main source behind his invented art technique and would begin a new path for him – in which he has so gracefully excelled.

What he came up with was a way to re-create the feeling and ‘sight’ he had when running his fingers over the fishing string. The rippled effect from the refracted sunlight and the texture both contributed to his art form. He uses fishing wire to create a layers made up of 8 rows of wire that have been hand painted in small increments to form together a 3-D image.

Sounds complicated, and it is. Others have tried to learn but none have the patience or the technique. He uses up to 5 set of ‘eyes’ or magnified glasses to help him ‘see’ in very small amounts, the image that he wants to re-create. He then maps out the image based off of shading and layers, painting every small detail strategically until the final image comes together.

His art is the definition of ‘double-taking’. Every person that walks by one of these masterpieces is thrown off, confused, and inspired. In a gallery you will notice lots of side angles and turned heads, and then mentioning the artist is blind!

Think Jim stopped there? Hell no! Jim found himself needing a physical release for all this frustration and anger, and believe it or not got into karate and martial arts. A blind man, doing karate? Who would ever suggest such a thing? Well, no surprise here.. Jim excelled with flying colors. He started working with his teacher just listening for the first 3 months, knowing where sounds come from and how different moves will have to be perceived without vision. After that Jim began to train learning moves and the ring. A year after getting into martial arts, Jim was COMPETING in national competitions due to his talent. His teacher said he wanted him to enter normally, and the only way they would do this is if no one knew he was blind. You may be wondering how that could be pulled off.. but they had a plan. Jim would follow his instructor from ring to ring between fights following his voice, and once he got in the ring he knew where he was. At one point his instructor had to yell out “Jim open your bloody eyes! You’re freaking everyone out!” – which is accurate.. no one could figure out this guy and his odd ways. It wasn’t until after the competition, when he was announced THE WINNER, that his teacher brought his cane and jaws dropped when people realized they were beat by a blind man who was a decade or so older than his opponents…

Jim didn’t keep up with martial arts forever, after all it does cause some damage. After a broken nose, shoulder, and a few other things, he had to start thinking about his health and what was going to be do-able. His full circle has come upon him, an art lover from a young age finally making a living off of art – not quite the starving artists his dad expected. Jim’s art is on display in multiple galleries, his story is getting picked up by news and media teams, and his images inspire every single person that lays eyes on them.

When asking Jim how he feels about time and his path, he’s never worried about anything, he simply asks ‘what’s next’? Through all the things he’s done and seen, had to experience and deal with, this man appears to not be afraid of anything… with one exception: wasting time. 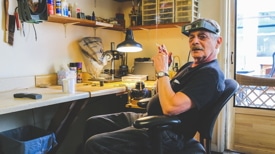 He says time is the only thing you can’t get back, to cherish it and use it for all it’s worth. He doesn’t think about age or time, just what all he can get done with the time he does have. He’s created a legacy and I’m sincerely happy to have stumbled into that gallery and met him. I can proudly say I own a custom piece by Jim and that sitting down and hearing his story has inspired me in too many ways to explain. His story goes to show that no matter what life throws at you, it’s never too late to believe in yourself and do what you always wanted to do. Nothing should hold you back from your dreams, not even being blind.